The installation of Brother GEORGE LIANOS as the new National President of AHEPA AUSTRALIA was very successfully held on Sunday 23rd February 2020 at the Ramsgate RSL in Sydney.
It was an excellent ceremony conducted by the very experienced Director of Ceremonies Bro Emanuel J Comino AM PNP and Bro Tasha Vanos OAM PSP as Installing Officer and enthusiastically attended by more than 60 eager Ahepans.
George Lianos has extensive experience in community affairs and business and is well suited and capable to lead AHEPA AUSTRALIA towards the reunification of AHEPA nationally.
Sister Sophia Notaras PGP of Canberra ACT was invested as the National Vice President.
Congratulations Bro George and Sis Sophia!
We look forward to a very successful term of office with our full support! 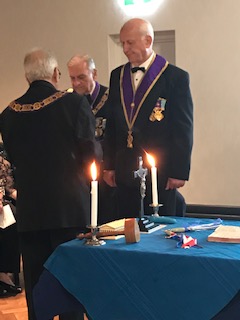 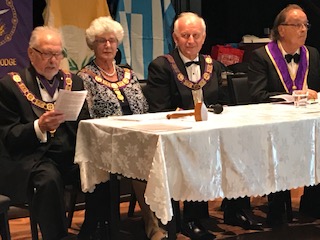 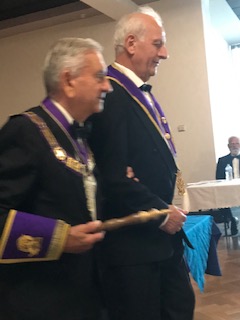 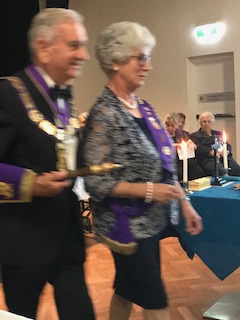 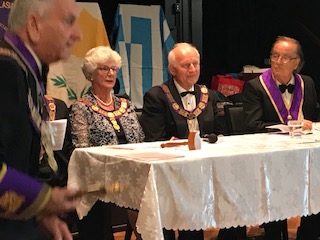 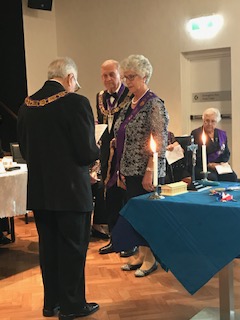 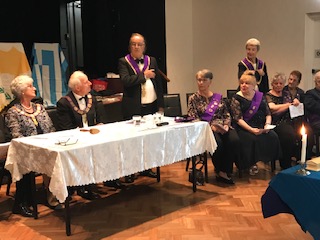 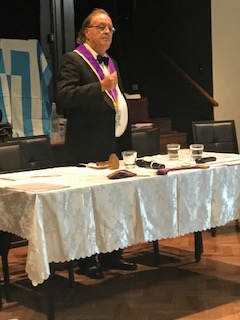 The GRAND LODGE AND DISTRICT LODGE in NSW hosted the 65th NATIONAL CONVENTION in SYDNEY from the 16th to the 18th November 2019 at the RAMSGATE RSL CLUB and involved over 50 delegates from all over Australia.

The outgoing National President of AHEPA AUSTRALASIA, Mrs Helen Katsaros chaired the Convention accompanied by many of the National Lodge members.

On Sunday 17th of November the Delegates attended a church service at St Spyridon Greek Orthodox church in Kingsford. The official opening of the Convention was held at the The Lakes Golf Club in the presence of Her Excellency the High Commissioner for Cyprus, Mrs Martha Mavrommatis and the Consul- general for Greece in Sydney, Christos Karras. Both Dignitaries offered their best wishes to the Convention Delegates and gave a detailed account of the current issues affecting both our mother countries of Greece and Cyprus.

The 65th National Convention was hailed as a great success as the Delegates involved in various conferences and events exchanging many opinions and ideas on important Educational, Philanthropic and Cultural issues as well as discussing new strategies for the future of the Organisation and ways of encouraging new membership. It was all very constructive and harmonious!

The Convention also elected the next National President Mr. George Lianos from Sydney and the National Vice President Mrs Sophia Notaras as well as Mr Theodore Lianos as a member of the National Lodge.

Substantial donations were made to the pediatric ward of the Canberra Hospital and the Greek Community Aged Care Home. In total, AHEPA made over $42,784 donations throughout the past year to various large and small Charitable Institutions.

About 25 of the Delegates also participated in a Bus Trip to the Blue Mountains the day after the Convention.

It was decided to hold the 66th National Convention again in Sydney in October 2020.

The National President of AHEPA AUSTRALIA, Helen Katsaros sends condolences to the people of Christchurch New Zealand with the following message:
AHEPA AUSTRALIA National Council, Members and I wish to express sincere condolences for those killed and injured in the terrorist attacks on Mosques
in Christchurch, New Zealand.  Our thoughts are with the people of those Mosques and the people of Christchurch.  To be shot down whilst you are in your
Church/Mosque is inexcusable, it is the most private and important moment of your day.
To those who have lost loved ones – we can only hope that God will give you the strength to undertake this mourning period.
To those who are injured – may your injuries be temporary.
To those who watch on  – may your prayers be heard.
We condemn this terrorist attack and can only hope that it will never happen again.
Helen Katsaros
National President
AHEPA AUSTRALIA

The 64th National Convention was held from the 10th November to the 15th November 2018.

The 61st National Convention of AHEPA AUSTRALASIA held in Melbourne from the 9th to the 12th October 2015 decided to hold an Annual YOUTH CONVENTION specifically for younger members. The Youth Convention is to be held every January in different cities in order to give the opportunity for more young students to participate from around Australia. The inaugural Youth Convention will be held in January 2016 in Brisbane and is to be organised by the Youth Chapters of Achilleas in Victoria and Thoron in Queensland.

The Youth Convention is a very important step forward and is aimed at the intergenerational progression of the Association with the Youth of AHEPA being more involved in the future. “AHEPA YOUTH is about promoting   Leadership qualities, Fundraising and Networking amongst Greek Youth.” said Jiannis Tsaousis, past president of Achilleas, who proposed the Annual Youth Conventions.

AHEPA has been fortunate in achieving important intergenerational rejuvenation in recent years with the establishment of Chapter Achilleas and Kleio in Melbourne and Thoron and Pythagoras in Brisbane. The younger members of AHEPA were very much involved and showed great interest and enthusiasm in the important discussion and decisions in the 61st National Convention which was held in Melbourne at the New Greek Community Cultural Centre in Lonsdale st. Melbourne which involved delegates from all over Australia.

The Convention also decided on the major restructure of the Organisation in order to unify AHEPA by establishing one representative body of the STATE COUNCIL as the highest executive body of the Association in each State and Territory. The State Council will consist of both male and female members of the organisation.

The Official Opening of the Convention was held on Friday 9th October at the Greek Community Centre in the presence of many distinguished dignitaries, including The Hon Maria Vambakinou, federal member for Caldwell, the president of the Greek Community of Melbourne Mr Bill Papastergiadis and Father Kosmas Damianidis representing His Eminence the Archbishop Stylianos and Bishop Izakeil. The Delegates and guests were welcomed by the National President Mrs Christine Lynch OAM, who officially opened the Convention.

The highlight of the evening was the presentation of the AHEPA Humanitarian Award to Mr. Kon Karapanagiotidis, CEO of the Asylum Seeker Resource Centre, for his meritorious services to the asylum seeker community. Mr Karapanagiotidis spoke with great passion about his work and his dedication to our Hellenic ideals of Philanthropy and “philoxenia.”

The Convention also presented well deserved Awards such as the AHEPAN OF THE YEAR to Sis Bessy Mougos, the inaugural Daughters of Penelope Achievement Award to Sis Tasia Manos for her services to the female arm of AHEPA and the two shields for increased Membership to Chapter ATHENA of the Daughters of Penelope. The installation of the President of the younger Chapter Kleio, Sis Natalie Livaditis, was also held on the installation evening.

The Convention discussed and endorsed Resolutions concerning the important National Hellenic Issues such as the Macedonian, Cyprus, Pontian and Asia Minor Genocides, Theological College of Halkis and the Restoration of the Parthenon Marble and national Projects to aid the Community.

As part of the largest Hellenic Association in the world, AHEPA AUSTRALASIA continues to promote their important Cultural, Charitable, Educational and Social objectives and through hard work have achieved many goals and gained much recognition in the 81 years since inception in 1934.

Once again AHEPA members have excelled in their Philanthropic work with large donations totaling over $122,000 made to various Charitable institutions including for Medical research, Children with special needs aged care and welfare, Sierra Leone Ebola virus epidemic, Schools and University awards and of course our Greek Orthodox churches. AHEPA VICTORIA and the AHEPA Daughters of Penelope donated $25,000 towards the New Greek Community Cultural Centre building. We are also very proud of its AHEPA GREEK SCHOOL in Ivanhoe with over 130 students learning the Hellenic language and culture.

AHEPA AUSTRALASIA will hold and celebrate its 60th National convention in 2014 at the beautiful Barossa Valley in South Australia.

The 60th National Convention will be held from the 11th October to the 19th October 2014.

The Convention Program with full the details will be posted soon.

Be sure to keep those dates for what promises to be an exceptional Convention with many great events and of course plenty of wine tasting!

The 59th National Convention of AHEPA AUSTRALASIA will be held from the 12th  to the 19th of October 2013 on the Gold Coast Queensland at the Seaworld Resort.

All Ahepans are invited to make arrangements to attend what promises to be a great Convention.

Information on registrations and Booking will be provided shortly.

Please pencil in these dates for your Convention holiday!

The new Chapter Thoron (Greek for “Gift”) was inaugurated and the foundation officers were installed in Brisbane QLD on Friday 7th December 2012.

The National President, Elias Doufas, attended the Inauguration/Installation and offered the congratulations of all Ahepans and presented the Charter from the National Lodge to the foundation President Nicholas Inglis.

The new Chapter consists mainly of younger members who are keen to continue the AHEPA Objectives and Principles of Education and Philanthropy.

Chapter THORON was created for the purpose of establishing a process for donations of grants to the Australian charitable organisations of Queensland in mainly the fields of Health, Education, Arts and Culture, Research and Science.

The new YOUTH Chapter ACHILLEAS was inaugurated and the foundation officers were installed in Melbourne VICTORIA on Sunday 16th December 2012.

The National President, Elias Doufas, attended the Inauguration/Installation and offered the congratulations of all Ahepans and presented the Charter from the National Lodge to the foundation President Jiannis Tsaousis.

The new Chapter consists of younger members 18 -25 years of age who are keen to continue the AHEPA Objectives and Principles of Education and Philanthropy. They have already shown great initiative and a very strong interest in promoting our Hellenic Language and Culture and have already set their goals to assist our compatriots in Greece who are suffering hardship due to the Financial Crisis,

ACHILLEAS YOUTH CHAPTER  is considered as the “Re-birth” of AHEPA in Melbourne as it has been a long struggle by existing and aging members to introduce new younger members to AHEPA in order to pass on the baton and continue the wonderful work that is captulated in our Objectives and Principles of Education, Philanthropy, Civil Responsibility and Individual Excellence.

All Ahepans across Australia and New Zealand congratulate the new Chapter who together with Chapter THORON in Brisbane have started a rejuvenation process in AHEPA.